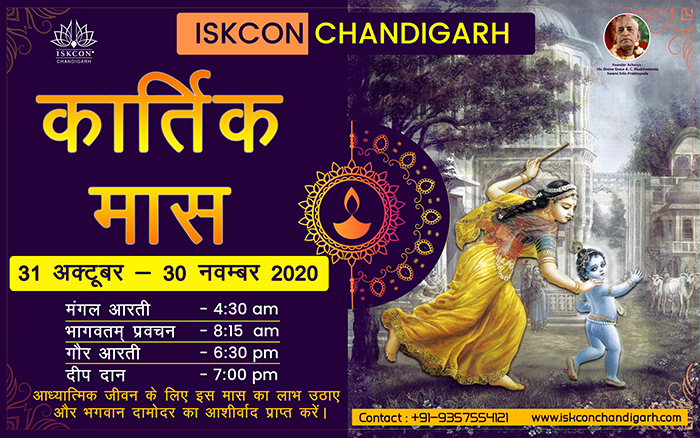 Blessed indeed is that fortunate soul, who, due to some past pious activities, can observe the month of Kartik. This month, known as the month of Damodar, is most auspicious and truly benevolent, for the sukriti obtained by performing devotional activities for the pleasure of the Lords in this month is 1000 times more, than in any other time of the year. This month commemorates how mother Yashoda was able to bind the Supreme Personality of Godhead Shri Krishna with the ropes of her love and affection. The same Supreme Lord, whom neither Lord Brahma, nor Lord Shiva, and not even the Goddess of Fortune, Laxmi devi, can ever bind, was bound by the selfless pristine parental love of Mother Yashoda. It is in this very month, that Vrajendranandan displayed transcendental fear from his mother and was running from her trying to escape her punishment. After putting her own endeavor and receiving the mercy of the Lord, the two ingredients that a devotee needs in order to bind Shyamsundar, she tied Him up to a grinding mortar, taking which Shri Krishna later crawled to the Yamalarjun trees growing in the courtyard of Nanda Maharaj and delivered the two sons of Kuber, namely Nalakubera and Manigriva. Remembering this beautiful pastime, and hoping to one day be able to tie Damodar with their ropes of love, all the devotees offer ghee lamps in the evening and sing the beautiful Damodarashtakam, creating a very transcendentally surcharged atmosphere in the temple room of Krishna Balaram mandir, in the land of Vraja, the very place where these pastimes were manifested by Yashodanandan, five thousand years ago, to attract the minds of the conditioned souls of this material world and make them realize their eternal identity as the servants of Shri Krishna (Jivera svarupa haya Krishnera nitya-dasa).

This month is also known as Urja vrata. Urja means shakti and refers to Shri Krishna’s internal potency which is none other than Vrindavaneshwari Shri Radha, and thus she is the predominating deity of this month of Kartik, and the glorification of her transcendental name, fame, forms and qualities, is the main vrata to be performed in this month. This is the month when Shri Radha and the other sakhis sang the Gopi geet, which is truly relished by the elevated vaishnavas following the moods of the young damsels of Vraja, whose love for Krishna is unsurpassed, and the foremost of whom is Shrimati Radhika. Aspiring to be the humble recipients of a single drop of the moods of separation of the Gopis and pleading to receive the dust of their lotus feet, the devotees all chant the Gopi geet after Damodarashtakam.

This month is truly glorious not only due to the aforementioned reasons, but also because many prominent pleasing pastimes of the Lord were performed in this month of Kartik. The first day of the month, Sharad Purnima, is when the Sharad raas was performed and the desires of all the Gopis of Shri Krishna were fulfilled. In this month, the Gopis who had never before attained the direct audience of their worshipable Lord, their very life and soul Shri Krishna, were purified of all the traces of anarthas left in them by the intense heat of separation and were able to fulfill their long cherished heart’s desire to attain their one and only goal, the lotus feet of Shri Krishna.

It was in this month that the demon Arishtasura was killed, which led to the appearance of Radha kund and Shyam kund, two beautiful kunds at the foot of the great Govardhan hill, having jeweled steps, blooming lotus flowers and surrounded by the kunjas of the eighth prominent Sakhis, and in the center Svanada sukhad kunja of ananga manjari where the divine couple perform many enchanting pastimes.

The Amavasya of this auspicious month is celebrated as Dipavali, the festival of lights, celebrating the long awaited return of Lord Ram to his kingdom Ayodhya after the 14 years banishment and the war that waged between Ram and Ravan. All the devotees celebrate this beautiful festival by lighting lamps in all the corners of their houses and discussing the pleasing transcendental pastimes of Lord Ram. The next day of Amavasya is celebrated as Govardhan puja, when all the Brijvasis, after stopping the worship of Lord Indra in accordance to the instructions of Shyamsundar, worshiped Giri govardhan, who is celebrated as Haridasya varya, the best of the Vaishnavas, who serves the divine couple with its many gushing streams, beautiful waterfalls, fragrant forests full of fruits and flowers and caves suitable for various pastimes. Mother cow is also worshiped on this day, and all the Brijvasis performed the parikrama of the glorious blessed mountain Govardhan. Following in their footsteps the devotees perform parikrama of Giriraj maharaj and offer anakut to the deities.

Other auspicious days celebrated in this month are the Disappearnce day of Srila Prabhupad, the founder acharya of ISKCON, without whose mercy we would know nothing about this supremely purifying month. A few days after that, comes gopashtami, when Shri Krishna goes for cow herding for the very first time. And many other festivals are celebrated in this month enhancing the spiritual mood of this already transcendental realm of Vrindavan.